A few months back I wrote about the discrepancy between between the size of organic sales in proportion to the acreage under organic production, which got me to thinking about the ways in which our mental maps of the food system often diverge from the reality. Many of the aspects of the food system that take up a lot of mental space don’t actually take up as much space in reality, either in terms of physical space or in terms of impact.In the organic/conventional debate, you’d think that organic production made up a significant portion of sales and production. In spite of the column inches devoted to discussing organic farming, it only accounts for about 5% of grocery sales, despite two decades of rapid growth. But even that masks how little organic production actually accounts for in the overall scheme of things.Organic production actually makes up around 0.6% of total US farm, pasture and range land acreage. In the U.S., organic production makes up for 0.8% of cropland and 0.5% of pasture. In 2011, there were 5.4 million acres in organic out of 914 million total acres, or 0.6%.

To put a little perspective on the relation of small organic farms in the US, they cover 1 million acres, or just 20 percent more land than the 825,000 acres of King Ranch in Texas, the largest ranch in the country. Or just double the area of Padlock Ranch in Wyoming and Montana.

Last week, FAFDL member and Washington Post columnist Tamar Haspel touched on the disconnect between mental maps and reality in writing about why increasing demand for vegetable production isn’t going to transform the food system in impactful way.

There’s a simple reason, and it’s math: Even if we were to vastly increase our vegetable eating, as just about everyone tells us to do, vegetable acreage is a blip on the agricultural landscape.

Right now, Americans average just over one vegetable serving per day, about 400 servings per year, an amount that has remained consistently and dismally low for a long time. Let’s triple it! That means 800 more vegetable servings per capita, per year. An acre of spinach yields about 100,000 two-cup servings. To cover every American’s increase, we’d need 2.4 million additional acres. Factor in waste, call it 4 million. Add one more daily serving, call it 5 million.

To put that in perspective, our current system has 14 million acres of “specialty crops,” the USDA’s name for fruits and vegetables (and such miscellaneous products as Christmas trees and maple syrup). Vegetables account for 4 million of those acres, which means that our new diet regimen would require us to about double what we’re farming now.

Double! That’s a lot. Seems that way, anyhow, until you widen the lens. Corn, soy and wheat together occupy about 230 million acres in the United States, and there’s another 100 million for other commodity crops. Those 2 to 5 million additional acres we need for our massive shift to vegetables? That’s a measly 1 percent of our total acreage; if you want to fix agriculture, it’s the other 99 percent that need your attention.

When people think of farming, they usually think of the produce section of the grocery store, and maybe some dairy – milk, eggs, cheese. But farming in the US is overwhelmingly dominated by row crops – grains and pulses.

This is what the distribution of acres looks like across our major crops in comparison to the entire categories Orchards, Vegetables, Berries and then how various vegetables compare: 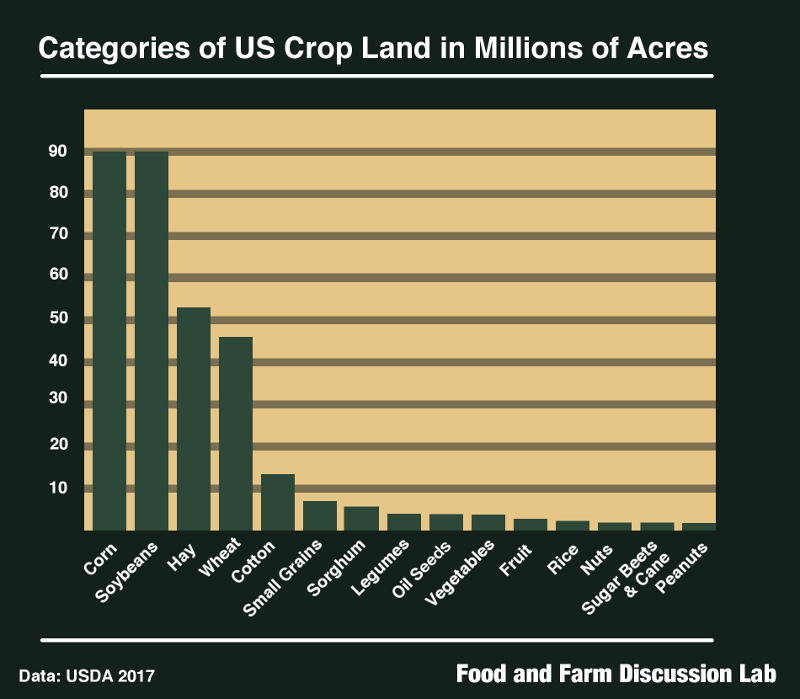 What we are looking at are power law distributions. Power laws distributions develop when advantages multiply preferences and preferences multiply advantages. The incredible ability of corn to transform solar power into edible calories draws the attention of breeders, who multiply that ability which makes corn really useful which ends up creating a ton of infrastructure around putting corn to good use (and some not so good uses). The result is that a crop that might have been almost as useful as corn gets left in the dust. Oats used to be produced in this country at a similar scale to corn. And then we stopped using horses as basic transportation and that usefulness dropped away. Internet search is a power law distribution with Google far outpacing its competitors by a factor that far exceeds the difference in quality between Google and whatever the number two search engine is. In the fast food industry McDonald’s US sales is equal to the next three competitors, Starbucks, Subway and Burger King with #20 Papa John’s thrown in for good measure.

Power law distributions work like the old joke about two hikers being chased by a bear. When they first hear the bear in the woods, one hiker starts gather rocks to throw at the bear. The other starts putting on his boots. His friend asks, “What are you doing? You can’t outrun a bear.”

The bear is life. It’s gravity, friction, a bad break, rotten timing, it’s everything that separates the few things we really rely on from all the other useful things in the world.

If you’d like to see farms that grow a greater diversity of crops, the issue is less about how little vegetables we consumer as it is about how much meat and dairy and how few beans, lentils, oats and barley we eat. If you want to see greater diversity in on America’s farms, start getting your calories from 13 Bean Soup and 10 Grain Hot Cereal .

There is a lot of room for improvement in both our diets and the food system as a whole. Getting there is going to require starting with more accurate mental maps of where the big levers really are as opposed to the ones that we tend to get preoccupied with. I don’t have any big think takeaway to offer here, other than a promise to my urban armchair agronomist friends that your food system thinking will be much more focused and productive working with a more accurate set of mental maps.