In my series 17 Questions about Glyphosate, question 4. looks at glyphosate and its potential to affect our gut bacteria. This is one of the favourite returning points for many who find the newness of the field of microbiome research a reason be extra cautious, and in the process, sometimes jump into some rather hasty conclusions. 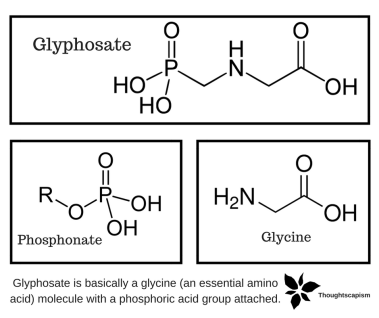 Glyphosate and the gut bacteria is a topic that holds a magnetic fascination for many. They simply cannot seem to let go of the idea that glyphosate could be causing problems for the microbiome, despite the perspective of the minuscule size of the residue concentrations, and despite lack of signs of a connection to health problems and glyphosate exposure in all the epidemiological studies from last four decades.

Some studies do exist which suggest a connection, but so far they are only sketching hypothetical models, may often be of very poor quality, and their flaws are easy for scientists, and even laymen, to detect if given a careful look. One good overview of that kind presented on Skeptoid.

This does not stop people like Seneff, et al (see more on that in sections 3. in the previous post, 2.-3. Glyphosate and Health Effects A-Z) from theorising that glyphosate could cause a host of effects through unclear mechanisms indirectly via the gut microbiome. In her article in Forbes, Kevin Senapathy sums up the major stumbling point of these claims well: there is no evidence for glyphosate having a harmful effect on our gut bacteria (more on that also in the end of the post). She writes:

Targeting the shikimate metabolic pathway in weeds, glyphosate interferes with protein synthesis in plants, bacteria, fungi and other organisms, but not in animals. There is no evidence that glyphosate residues on food affect the shikimate pathways of bacteria in the human gut. 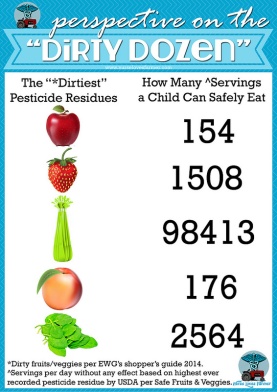 The pesticide residues on produce in general are really very low – Nurse Loves Farmer provides perspective on the dirty dozen.

But the lack of evidence of harm does not necessarily give a layman the reassurance it may relay to a researcher. Let’s make it more tangible. To help us with the effort, firstly, the very thorough and detail-oriented skeptical activist Credible Hulk has kindly dug out the exact figures on allowed levels of pesticide residue on a number of different plants in his post and gone to even more detail in his blog piece, where he lays out the math: a 70 kg person in the US would have to eat 28 kg or 62 lbs of produce at the highest level of allowed residue every day in order to reach the limit set by Environmental Protection Agency (EPA) as the still safe level for the consumer – 2 mg glyphosate per kg body weight per day. This allowed level already has a hundred-fold built-in safety margin: it is set hundred times lower than the level for no observed adverse effects (NOAEL) in the most sensitive lab animal species tested. It is physically not possible to eat enough of normal produce to reach that level. And what about gut bacteria?

Neuroscientist Alison Bernstein aka Mommy, PhD, has tried to illustrate the implausibility of us ever ingesting enough of glyphosate to have the chance to influence our gut bacteria in any meaningful way, here:

Many people are concerned that pesticides, in particular, glyphosate, alter the gut microbiome and somehow cause autism. […] We can calculate how much glyphosate you would ingest on average from one piece of produce and see if that is enough to kill bacteria. So if you eat a 5 ounce (~150 g) piece of vegetable treated with glyphosate (5 ounces is about the size of an average apple for reference). Using his [Credible Hulk’s] high estimate of 5 ppm [glyphosate residue], we calculate that you get 0.75 mg of glyphosate. 98% is not absorbed so let’s assume it stays in your stomach for as long as it takes to pass through your digestive system. The 2% lost is not enough to worry about for this estimate. So 0.75 mg in 1 L (the volume of a full stomach) is 4.4 uM (micromolar). The papers I found looking at toxicity of glyphosate in bacteria were using MILLIMOLAR range concentrations of glyphosate. Micromolar means 10e-6 molar, or 0.001 Millimolar. So 4.4 micromolar is 4.4 x 10e-6 Molar or 0.0044 Millimolar. This is so far below the doses (and they did full dose response curves) that had an effect as to be utterly meaningless. [Edited: molar to millimolar.]

[…] You’d get GI issues from eating too much vegetable mass long before you ingested enough glyphosate to alter your gut microbiome.

Even studies (here and here) which look at inhibiting effects on the growth of bacterial cultures require millimolar concentrations of glyphosate: thousand times larger concentration than the micromolar concentrations potentially present in our stomachs, demonstrated in the calculation above. To reach that same inhibiting effect they saw in the studies in our gut, one would have to ingest roughly 150 kg or 330 lbs of legumes (as legumes have the highest set limit for pesticide residues, and here we’ll assume that batch would come near that limit) at once.

Keep in mind that in the study above they note an energy drain, but the bacteria were not killed. They simply stopped replicating for the time that glyphosate inhibited the enzyme needed for synthesising necessary aromatic amino-acids. Supplementing the culture with said aromatic amino acids resulted in recovery of bacterial growth. Think for a moment about the human gut: it is a protein-rich environment, where all the nutrition from our food is broken down into its constituents. It is basically a soup of amino acids. Even if we ate more than our own weight in legumes, we would probably not manage to inhibit our gut bacteria with glyphosate, since they would not have to depend on their inhibited enzyme and could just absorb their amino acids from our food. 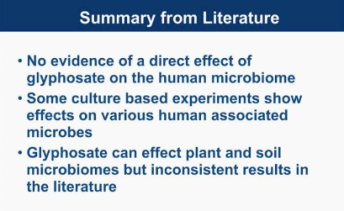 This is in line with the epidemiological evidence discussed earlier, which has found no connection between glyphosate and cancer, non-cancer, or reproductive health outcomes. Microbiome researcher Jonathan Eisen from University of California, Davis, was asked to present an introduction to glyphosate and microbiome research for the US National Academy of Science in 2015. He notes that most papers on the topic of glyphosate and gut bacteria base their ideas on a paper from Seneff and Samsel (discussed at length in the previous post) where the hypothetical connection is described.

To recap, Seneff, together with Samsel also claim that glyphosate is behind a whole host of ‘modern diseases’ (they seem to subscribe to the strange notion that most diseases did no exist before modern times). According to Seneff’s analysis, glyphosate is also behind the development of, hold on to your hats: gastrointestinal disorders, cancer, obesity, diabetes, heart disease, autism, Alzheimer’s disease, depression, anxiety syndrome, Parkinson’s disease, prion diseases, infertility, and birth defects. In an interview, Seneff goes as far as to blame glyphosate (RoundUp) for school shootings and the Boston Bombings. I don’t even know what to say to that. Maybe we should also blame glyphosate for climate change?

With an order of magnitude more down-to-earth approach, Jonathan Eisen concludes the topic as follows (quote and slide can both be found in the presentation soon after the 22-minute point):

I could not find anywhere in the literature much if any direct evidence that glyphosate would lead to, first altering the microbiome, then, leading to health problems.

Touching on question 15 on soil microbiome, Eisen also made the following comment in the discussion following one his blog posts:

I am actually interested in how glyphosate might affect microbiomes. I think it is incredibly unlikely that ingestion of glyphosate in food has any significant effect on microbiomes in animals. But I do think it is possible that glyphosate affects soil and plant microbiomes and that in turn could affect what microbes come into animals (via eating the plants). So I think this is interesting and worth pursuing. This notion is not about glyphosate good or bad. Just about testing the possibility that it indirectly affects animals microbiomes (and if so, this could be a beneficial effect).

This is an interesting area of research, and it’s always good to keep an open mind and a critical eye out on new evidence accumulating on the topic. Trying desperately to fit the evidence into the idea, rather than allowing our ideas to be shaped by the evidence, however, will not lead us closer to understanding how the world works. So far in the light of the best evidence it does not seem likely that the world would work in a way which would enable residual glyphosate levels in our food to have any effect on our – or our microbes’ – health.